It’s time we all embraced the 21st century. This article shows the worldwide impact of the gay rights movement.

Posted by EILE Magazine on May 2, 2020 in LGBT, News & Current Affairs 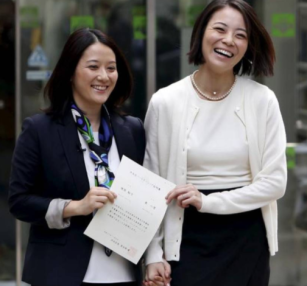 A Japanese charity has won the backing of businesses, from banks to insurers, for a new scheme offering digital partnership certificates, that allow same-sex couples to tap into the same staff benefits as heterosexual ones.

The Famiee Project said it wanted to spur change, by tapping into growing business support for LGBT+ rights, in socially conservative Japan, and aims to sign up 100 businesses by the time it launches the scheme in July.

Gay marriage is illegal in Japan, and although about two dozen cities, towns, and wards issue same-sex partnership certificates, they lack legal standing, and prejudice persists.

“If we have a big network of corporations that support us, we can persuade the government to change the law,” said Famiee Project founder Koki Uchiyama.

“That kind of movement is already happening in Japan,” he told the Thomson Reuters Foundation by phone from Tokyo, referring to the growing business support for LGBT+ rights.

The scheme has so far been endorsed by 17 companies, including banking firm, Mizuho Financial Group, insurer Sompo Japan, and Hotto Link, a public-listed data firm where Uchiyama is the chief executive.

Some of the 17 firms have already recognised certificates issued by local authorities, but these documents can only be used in the area they are issued.

Famiee Project said its digital certificates will use blockchain technology and QR codes for record and verification, making it easier for nationwide use.

The project aims to get 100 companies on board by July, to provide same-sex couples with benefits such as marriage or parental leave.

It also wants the firms to accept the certificates for services, such as opening joint bank account, or naming insurance beneficiaries.

The Justice Ministry and Welfare Ministry did not respond to a request for comment.

Japan’s laws on LGBT+ issues are relatively liberal compared with many Asian countries, with same-sex relations legal since 1880, but being openly gay remains largely taboo.

About a third of Japanese companies have measures in place to support gay couples, but discrimination is still common, according to Nijiiro Diversity, which campaigns for LGBT+ rights in the workplace.

“This certificate alone is not effective. The government should give more support to companies working towards measures on LGBT+ rights,” said the group founder, Maki Muraki.

Activist Ai Nakajima said she hoped the scheme would spur government into action.

“Companies are changing, but the government is not changing. So tax benefits or health insurance benefits are still not possible,” said Nakajima, who was among 13 same-sex couples to sue the government over the right to gay marriage last year.