Much more that just a current sound byte!

A phrase that has popped up in current conversation and articles, Social Distancing. If you have been living in a cave for the past month you may not have heard the phrase. It actually is not something new, and it can manifest it self in various forms, depending on the circumstances. Say for instance COV19 -Virus or corona-virus has brought about the rebirth of Social Distancing due to its global  ‘pandemic effect’.

History is filled with tales of similar occurrences; but one that may have failed to catch your attention is the story of a small English Village, called Eyam.  This tiny place outside London suffered the devastation of the Yersinia pestis, also known as the Black Death or the plague. Black Plague. The brave population  of  Eyam provide us with a great example of Social Distancing carried out in a sensible and selfless manner.

To be sure, COV19-Virus is not by any stretch the same thing as Y pestis, or Black Plague but the global ramifications of the two are quite similar.

Yersinia pestis, also known as the Black Death or the plague, wreaked havoc long before the age of the Renaissance. The ancient Greeks experienced plague epidemics, as did the Byzantine Empire in the sixth century. Originating in Central Asia, the plague spread to China and India, where it left their ports and arrived in Europe aboard rat-infested ships. The rats carried fleas that bit humans, transmitting the disease. Early symptoms of the bubonic form of plague included fever, sweating, shaking and weakness. Some caught the pneumatic form, which affected the lungs and caused coughing in addition to the other symptoms. Buboes, or swellings, filled with blood, and pus appeared at the lymph nodes as the disease progressed, causing severe pain.

The plague,… had a death rate that approached 95 percent for its pneumonic variety. Abnormal heat waves contributed to the plague’s rapid spread …and some afflicted areas would need hundreds of years to recover from the effects of depopulation.

Eyam village and the Great Plague 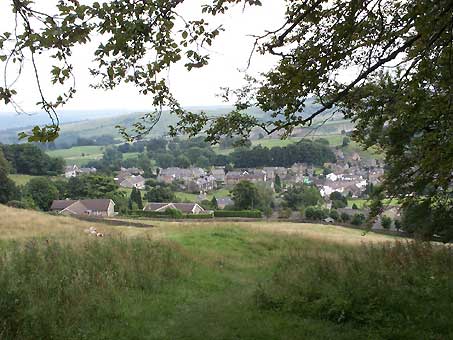 It’s hard to imagine that the quiet village of Eyam, off the A623 in Derbyshire, could have such a fascinating, yet tragic story to tell. But …. at the end of August 1665 bubonic plague arrived at the house of the village tailor George Viccars, via a parcel of cloth from London. The cloth was damp and was hung out in front of the fire to dry, thus releasing the plague infested fleas. On 7th September 1665, George Viccars, the first plague victim, died of a raging fever. As the plague took hold and decimated the villagers it was decided to hold the church services outdoors at nearby Cucklett Delf and, on the advice of rector William Mompesson and the previous incumbent Thomas Stanley, villagers stayed within the confines of the village to minimize the spread of the disease. Cucklett Delf was also the secret meeting place of sweethearts Emmott Sydall, from Eyam, and Rowland Torre, who was from a neighbouring village. They would call to each other across the rocks, until Emmott Sydall herself became a victim of the plague. Six of the eight Sydall family died, and their neighbours lost nine family members. 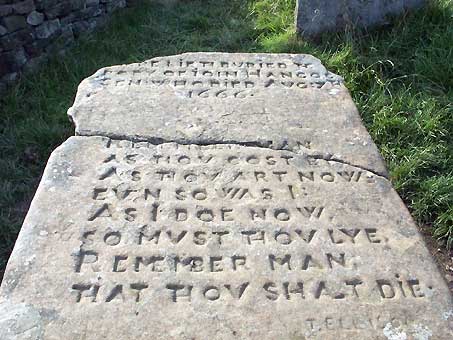 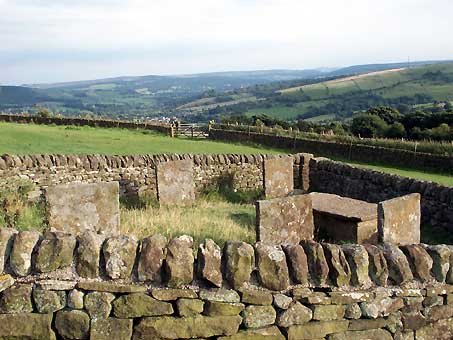 To minimize cross infection, food and other supplies were left outside the village, at either the Boundary Stones, or at Mompesson’s Well, high above the village. The Earl of Devonshire, who lived at Chatsworth House, freely donated food and medical supplies. For all other goods, money, as payment, was either purified by the running water in the well or was left in vinegar soaked holes. The Riley graves, close to Riley House Farm and approximately 1/2 mile from the village house the bodies of the husband and six children of farmer Elizabeth Hancock. All died within a week of each other. Because of the high risk of infecting her neighbours she had the traumatic task of burying them all herself. Even more tragic is that the infection probably came to her family when she helped bury another villager’s body. Twelve months after the death of George Viccars, the plague was still claiming its victims, and on 25th August 1666 Catherine Mompesson, wife of the recently appointed rector William Mompesson (aged 28) , died of the plague. She had loyally stayed with her husband and tended the sick, only to become a victim herself. 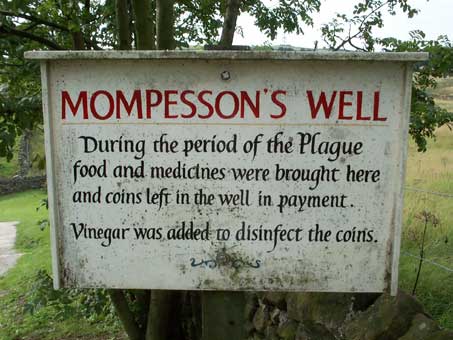 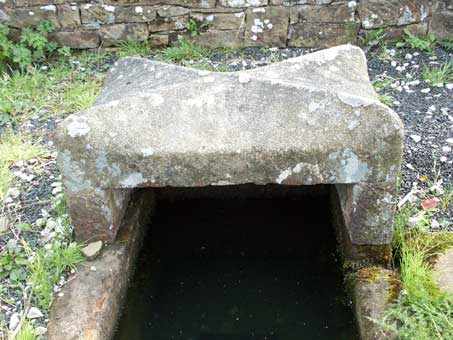 The Plague in Eyam raged for 14 months and claimed the lives of at least 260 villagers. By 1st November 1666 it had run its course and claimed its last victim. Eyam’s selfless villagers, with their strong Christian convictions, had shown immense personal courage and self-sacrifice. They had prevented the plague from spreading to other parishes, but many paid the ultimate price for their commitment.

Almost 350 years later a remembrance service is still held every Plague Sunday (generally the last Sunday in August) at Cucklett Delf, Eyam. Ironically, in 2001 the service had to be held in the churchyard at Eyam as much of Britain had its own modern plague (Foot and Mouth Disease) and most farmland was declared out of bounds. The other three pictures in the sequence below were taken on Plague Sunday the following year. 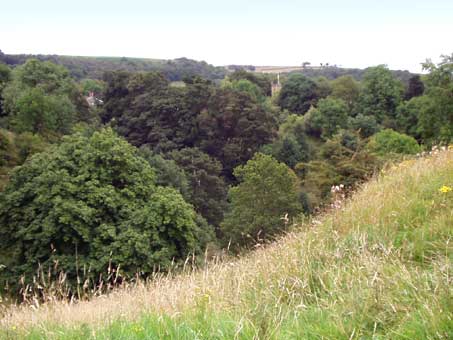 Catherine Mompesson’s tomb is in Eyam churchyard. It is decorated with a rose entwined wreath every year on Plague Sunday as this is the Sunday closest to Catherine Mompesson’s death and the outbreak of the plague. Other families had to bury their own dead, in either fields or their garden. Clicking on picture 3 below reveals the error made by the stone mason whilst carving the name Mompesson.

It’s impossible to visit this unspoilt Derbyshire village and not be moved by the tragic events that took place there almost 350 years ago. 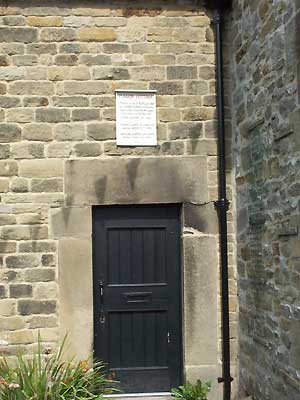 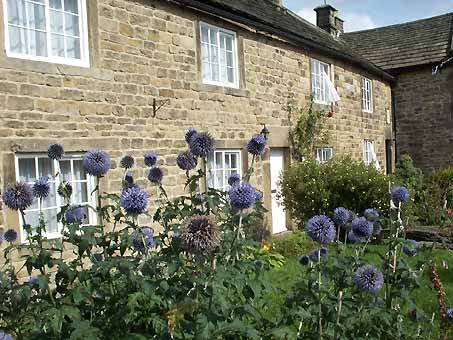 If you would like to know more about life during the Plague at Eyam please check out Amazon books for:

Year of Wonders by Geraldine Brooks