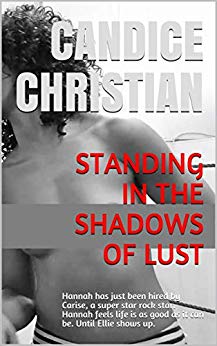 Just in case you missed this when it was first released over the weekend!

This new story, has a great story line about  a huge African America Rock singer, Carise. One name like Beyonce, Prince or Madonna. She lives a fast life and has her administrative assistant’s scratch and claw to keep in her favor.

Here is an excerpt from the story:

Hannah watched Carise undress through the mirror in Carise’s dressing room. Carise always looked good, Hannah thought. Carise’s mass of black curls on her head framed her long face perfectly. Carise was a tall, slender, brown eyed, ebony beauty. Even at 39 her body was of a 21 year old and her large breasts still stood out firm and perfect.
Her hips were curved beautifully and her round ass, was high on her. Her most treasured part of her smooth, honey voice, with a hint of a southern accent. Hannah loved every inch of Carise. She loved working for Carise also.
It was hard to believe that she started working for Carise about a year ago. Mostly being a personal assistant to Carise. Carise was her idol, and she was a big fan of hers. But now since she was around Carise a lot, it just seemed like she and Carise were old friends. Carise knew Hannah’s mother so that was partly how she obtained the job.
She liked it. She got to meet people in the music industry and travel with Carise. Hannah smoothed back her shoulder length black hair. Her brown eyes gazed at Carise’s wonderful naked body. The best part of Hannah’s job, probably was fucking Carise’s brains out.
Carise was always in the mood for that, and Hannah enjoyed burying her face into Carise’s sweet koochie. Hannah turned around to face Carise.
“You look great,” Hannah said.
“Well thank you hon,” Carise said in her smooth honey voice, “But I ain’t even dressed yet.” Carise let out a giggle. Carise sat down on a small couch in the room. “Why don’t you come over here an’ sit next to me?” Carise said softly patting down on the couch with her hand. Hannah sat down next to Carise. “What would you do if I just quit and gave it all up, the singin’ an’ all?” Carise said looking at her.
Hannah tried to focus her eyes on Carise’s face, but it was hard to do when Carise sat there naked.
“I’d be out of a job,” Hannah said.
Carise let out a high pitched laugh. Hannah laughed a little, not finding what she said funny, because she figured it was true.
“You just crack me up Hannah,” Carise said kissing Hannah on her lips.
Hannah let her tongue slip into Carise’s mouth. Carise’s tongue met Hannah’s and they both began to kiss and probe into each other’s mouth. Hannah fondled Carise’s soft breasts with her hands. Carise’s dark nipples were hard.
Hannah broke the kiss and began sucking on Carise’s beautiful breasts. She sucked and licked Carise’s nipples, squeezing them in her mouth. Carise ran her fingers through Hannah’s hair as Hannah sucked on her nipples. Hannah then got off the couch and on to the floor on her knees right under Carise’s legs.
Hannah spread Carise’s legs apart and began to suck and kiss on Carise’s inner thighs right near her neatly shaved bush. Carise let out soft moans and gasps as Hannah flicked her tongue right near her pussy. Carise’s pussy was always wet and Hannah loved tasting it.
Hannah reached up and touched Carise’s clit, moving it around in circles. Carise moved her hips up and down on Hannah’s fingers. Hannah flicked her tongue over Carise’s clit and began to suck on it. She squeezed Carise’s clit in her mouth with her lips, which drove Carise crazy, bucking her hips up and down against Hannah’s face.
Hannah licked Carise’s clit rapidly in small circles. Carise grabbed the ends of the small couch and began wildly bucking her hips up in the air, rubbing against Hannah’s face. Hannah climbed back on the couch and hungrily kissed Carise. Carise helped Hannah disrobe, until Hannah was in her satin panties.
They both fell on the floor in a frantic rush. Carise straddled Hannah’s leg and began grinding hard on it, feeling the friction of Hannah’s satin panties which drove her mad. There was a loud pounding on the door.
“What!!” Carise said yelling breathlessly.
“Carise hurry up, you’re on in three minutes!!” the concert producer yelled from the other side of the door.
“Okay, I’m comin’!!” Carise yelled back, giving Hannah a wink.
She kissed Hannah hard on the mouth, while they both rubbed on each other’s legs. Carise felt the rhythm go faster and faster until she exploded into an orgasm. She cried out only for a second, then relaxed on top of Hannah. Hannah was used to this rushed sex. It was like this before every concert.
Carise gave Hannah a quick kiss and quickly got up and got dressed. Hannah got up and helped her get her bra on while she put on her makeup and fixed her hair. Hannah was always surprised at how fast Carise was, even after they fucked each other. Carise blew Hannah a goodbye kiss and left the dressing room quickly.

CLICK ABOVE FOR A FREE STUFF FROM CANDICE CHRISTIAN:
Other Steamy Romance Stories by Candice Christian click below.
amazon.com/author/candicechristian