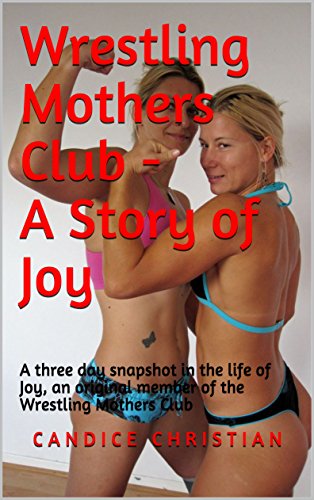 The Third and Final Episode in the Wrestling Mothers Club:

Dani came in one evening after I’d gotten home.

“Constance’s friend is over here from the UK and dropped in this afternoon,” she said.

“Yes! And I’d like to call on your good services as a referee again, apparently Constance told her about me, and after a couple of days rest she said she’d be rarin’ for a bout!”

“Yes! And I’ve accepted for Friday evening. Okay with you?”

I knew her physical capabilities and although her flexed biceps still make me boggle, I wondered if she was still in hard training.

“Of course I am Joy,” she said, “I don’t let you into all the secrets of my training…just be ready for Friday that’s all!!”

“She’s no girl,” answered Dani, “she’s 32, about two years older than I am. She comes from Manchester, and her name is Josey. Oh! and, er, she’s black, and beautiful and say she’s whipped Constance recently, would you believe.”

Dani had decided to hold the match away from the normal practice facility, my rec room was often converted to a wrestling venue, for private matches.Since Dani’s opponent was not a potential member, it was easier for the match to be held at my place.

Friday evening arrived. I was next door. The gym mat was down, the furniture moved, I’d also subdued the lighting to remove any glare. Josey arrived about eight. A real black stunner. We had refreshments in another room, and although the conversation flowed easily the smiles between Josey and Dani were tight, and they studiously avoided each other’s eyes whenever possible. We got around to details.

“To a finish,” said Dani

“I don’t mind you using anything I’ve got if you can for leverage, because I’m sure as hell going to use any part of you I need to!”

“OK! Agreed,” I said quickly. “No holds barred…wrestling…” “Without swimsuits!” “To a finish!” “Do you want to be oiled?” I asked.

They both did just a little. A few minutes before nine I had both contestants in their dressing gowns ready on the mat in the lounge. Josey was flexing her biceps, and as a matter of interest I took a tape measure and measured her upper arm – “16 inches”, I said, “same as Dani’s.”

“How about this,” Josey said crouching slightly, she moved the gown from her right thigh…I placed the tape measure around the black pillar of muscle.

At this Dani came over, and bared her upper leg flexing it, I passed the tape around, “28 inches,” I said.

Dani looked over at her black opponent, who stared back.

“Looks like we start even then, because I’m 150 lbs,” Dani retorted.

I took their dressing gowns and they squared off in the center of the mat – two perfect feline specimens, one black, the other white, both powerful, preparing to match muscles and bodies until one succumbed to the other… Dani was in first, from the front she forced Josey’s arm up behind her in a hammerlock. Josey winced but brought her knee up between Dani’s legs… It never landed, Dani gripped the black thigh between hers and increased the pressure on the hammerlock… Josey gasped, then put her right arm behind her, grasped her own wrist, and with a quick effort broke the hold. She turned into Dani and with a hip throw sent her tumbling.

They got to their feet quickly and grappled again, close to the wall. Josey spaded her hand and slid it between them…Dani yelped! Josey’s back muscles knotted…she lifted Dani up the wall by her crotch…her strong right and buried in the thick black hair…

Josey held Dani, a left arm bar across her throat, in this painful grip for many seconds…Dani’s head rolled…

As a last resort she grabbed Josey’s head and held it between her breasts…eventually through not being able to breathe, Josey had to relinquish her grip and back away, heaving for air…as Dani slumped by the wall massaging her abused crotch…

They circled, warily this time, showing more respect for each other’s capabilities than when they started. When they closed it was to drop to the mat to try strength holds to wear each other down. Sometimes Dani’s suntanned but comparatively white body disappeared writhing under the black powerhouse, other times Josey strained for freedom under Dani’s muscular torso!

The slight acrid odor of sweat lingered in the air, it was now dripping off them, but showed up more on Josey’s wide black shoulders as she turned the white amazon over…

“Come on you muscle-bound white whore, where’s your answer to this one!!” Josey hissed.

When Dani found the answer which was her strong right hand plunged deep in the dripping pubic hair between Josey’s thighs and by good leverage throwing her black foe to the mat…retaining the grip, she panted “There’s your answer black bitch…”

Josey rolled away from that one, leaped to her feet crouching low, Dani crouched just two yards from her…

Josey, muscular black body gleaming with perspiration, beckoned, “Come on Daniie honey…black muscles against white…I’m all black woman and you’re all white woman…come on baby, bring those white nut crackers I’ve heard so much about over here and match them against my black ones…Let’s really decide who’s the best woman…or maybe you’re afraid I’ll bust your gut?…”

Needing no second invitation, Dani smashed into Josey…they braced, legs apart, grunting like men…sometimes squealing like women, breast to breast…their massively hairy bellies glued together, they commenced to thrust mightily into each others loins…matching stroke for stroke…In…Out…In…Out…Each woman gripped her foe’s clenching buttocks as if to prevent her escaping this war of attrition…

In…Out…In…Out…On…and On it went, until from sheer exhaustion, no doubt brought on by more than one orgasm each, they sank to their knees in a double bear hug. Josey forced Dani to the mat, attempted a grapevine…but Dani gripped thighs with her black opponent.

Soon they were shaking and sobbing for breath… tighter…tighter…closer…closer…as they once again forced themselves into each other…the huge muscles on their twined power packs etched in black and white ridges against their skin; eyeball to eyeball they grappled in vicious combat as only woman rivals can.. deep in between their legs both used that most powerful of all female weapons against each other in a way they would never dream of doing on a man..

In a bone crushing effort to drain and destroy the woman in front of her! The breath was hissing between their teeth as the white girl rolled onto Josey…the black amazon arched her back, but to no avail…Then she forced her head and shoulders up as if to topple Dani. Dani then quite deliberately sought out Josey’s mouth with her own…their necks taunted….their teeth must have grated as Dani bent Josey’s head back…still she did not remove her mouth from Josey’s…

Their breath must have been rushing in and out of each other’s lungs as the muscular white and black amazons lay there locked in a death grip…long minutes passed…strong experienced fingers brought each other off savagely more than once…finally the black hands ceased seeking a nerve hold on the deltoids and slid from the white fighter’s armpits, slowly to the mat…the black thighs and calves relaxed their grip on the white ones…Dani sat astride her rival…I’d never seen her so exhausted…her mouth looked sore…Josey’s appeared a little chewed too…Josey’s black body shinning with sweat, her hard shapely breasts with their large purple nipples, that had provided so much leverage for Dani, rose and fell as she panted…Dani, sitting up in triumph looked over at me.

I shook my head…I could not count out the black fighter…I marveled at the fantastic body, now bathed in sweat…that powerful rib cage under those pink nippled heaving globes…she knew what I wanted to see…she turned Josey over onto her face…slipped her arms under the other woman’s armpits…her fingers clutched the hard black breasts…using them as leverage she strained backwards in a back-breaker, biceps bulging…minutes passed with no submission from the groaning Josey.

Dani let her flop forward on her knees, forehead resting on the mat, she crouched atop her like some big white cat on a black one, and in frustration slid her hands down, and trying something I’d never seen her do…a double claw hold!!! She gripped under her opponents lower torso, clawed fingers probing…seeking to force themselves through the very abdomen wall and grasp the entrails hidden there…after a lengthy and titanic effort Dani was rewarded for some half-an-hour of unforgettable wrestling against a superb opponent…

I heard it…low, and almost unintelligible…

As Dani relaxed, Josey added in a breathless whisper, as if to herself, “This time…I believe.”

Dani helped me put the rec room back to normal after Josey left. We talked for a bit before she left. Dani was on two weeks vacation and was in no hurry to go home. I had to tell her that I had to get to work early because the new girl I had hired to run Dani’s vacation was giving me fits.

“Jeez, Joy. She’s been there for about three months, what’s her issue?

“Shit, she is an air head with a dynamite body. Doesn’t have the sense to come out to the rain. She is taking advantage of the fact I have a wide on for her. She is due for her three month review day after tomorrow, and I am going to straighten this shit out once an for all.”

“Not if I don’t have too, but I am going to get more out of her than I am getting now.One way or another.”

“Good luck with that. I that prissy bitch at the gym trying to get your goat?”

“Is that her name? I have not met her yet. You going to challenge her to a match?”

“Don’t want to, she is so young, afraid I’d hurt her, because she gets me so mad. No I think I can just ignore her and let her attitude run its course.”

“If you need any help let me know, I could come back from vacation if you need me.”

“Absolutely not. I’ll be okay. But thanks for the offer. I have to get to bed, and I don’t want to appear rude but……”