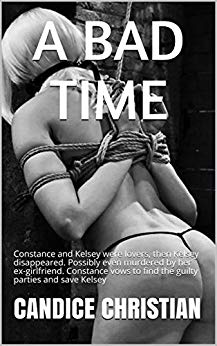 Constance lay back in her large bathroom Jacuzzi filled with very hot water as she sipped her double vodka on the rocks. A slight fragrance of lotus blossoms filled the air as she savored the memories of Kelsey and the sweet revenge that was inflicted upon her assailants.
She lazily gazed over at the transparent shower door when Jazmine began humming a sweet little tune, the way Kelsey did when she showered. Jazmine’s smooth ebony skin in contrast against the light blue tile of the illuminated shower was strikingly beautiful as she applied soap to her delicate parts, smiling sweetly and beautifully as the hot, steamy water caressed her slender body.
Jazmine turned off the water valve and stepped out on the white bathroom carpet and gazed back with pleasure at Constance.
“Feel good honey?” she asked as she smiled impishly at Constance.
“Uh huh, heavenly.”
“Want some company in there?” Jazmine asked as she strolled across the room toward Constance.
Constance held up her right hand and waved a gesture in a manner that meant: “welcome to my Jacuzzi.”
Jazmine stepped in and leaned back against the opposite wall of the oval tub. Jazmine and Constance arranged their legs in such a manner that genitals touched together under the swirling surface of the water and they began to slowly move, causing the sensations of soft skin against soft skin.
Constance handed Jazmine her vodka glass. “Sip?” she asked as she watched Jazmine take a mouthful and wrinkle her nose in displeasure.
“You have to develop a taste for straight vodka baby. It’s not like drinking pop.”
Both women continued to relax and enjoy the moment in silence, deep in thought of the fiasco that took place earlier that morning at the produce warehouse. Constance held out both hands toward Jazmine with her palms up.
Jazmine placed her hands in Constance’s and was pulled closer until lips gently touched. Jazmine uncoupled her legs from their position and slid over the top of Constance until she was looking straight down into her eyes. She parted her lips and pressed them over Constance’s lips, slowly sliding her tongue into her mouth. Constance returned the gesture by extending her very long and muscular tongue deep within Jazmine’s mouth as they both tightened the grip with their arms and legs.
“I love you Constance,” she said trembling slightly as she continued the deep kissing.
“I love you too baby,” Constance replied in a whisper.
As they both stepped out of the Jacuzzi Constance grabbed a large bath towel from the rack. She wrapped it around Jazmine’s body and pulled her close, softly kissing her lips as she gently dried Jazmine’s back.
Constance dropped down to her knees and began drying Jazmine’s genitals and inner thighs with the heavy, soft bath towel. As Constance was sliding the towel down the back of Jazmine’s legs, she gently brushed her lips across Jazmine’s shaved mound.
The sensations of the smooth skin on her lips, slightly damp from the Jacuzzi, heightened Constance’s passions as she continued to gently apply the towel down Jazmine’s legs and feet. Jazmine had backed up against the vanity as Constance pressed her lips further under her mound, parting her vulva to the extent that she felt the hot, slippery interior of her genitals.
Jazmine swooned in pleasure as Constance slid her long, textured tongue deeply along the front wall of Jazmine’s vagina as she pivoted her hips forward, while resting her butt against the front edge of the vanity, making her womanhood more accessible to her new lover.
Constance manipulated her “G” spot with the tip of her tongue, occasionally withdrawing it from the depths and sliding the tip up into her urethra and across her clitoris with electrifying results. During Jazmine’s deep, intensive orgasm, she momentarily lost control of her bladder, delivering a sudden burst of the hot, acidic liquid into Constance ‘s mouth, now tightly pressed against the interior if her genitals.
The sudden, unexpected moment of deviant pleasure made Constance’s own genitalia throb. Longing to be touched, Constance slid her finger inside and against her own clit as she felt herself starting into the throws of an orgasm. Jazmine, knowing that her screams were excessive, grabbed another towel and held it to her mouth as her womanhood began to explode deep within with pulsating spasms that made her bend forward and press Constance ‘s mouth and head more firmly against her.
They both collapsed to the floor at once. They gazed into each other’s eyes as they lay on the damp, deep piled bathroom carpet. Constance raised her hand and gently touched Jazmine’s cheek, caressing it ever so gently as she continued to silently gaze into her soft, fawn eyes. Without a spoken word or a whisper, Constance formed the three words with her mouth: “I love you.”
Jazmine smiled softly back at her, unable to speak as her heart rate began to slow back towards normal.
Even though Jazmine was in her early 20s’, Constance made her enroll in adult high school courses resulting in her obtaining a diploma. Jazmine continued her education at adult classes at a NKU extension facility where she obtained a degree in nursing. She met a young man who also attended classes, subsequently married him and had three little boys. They are all living a normal, happy life near Lexington.
“Constance? Oh…, she’s still a loner. She seems to intimidate people with her unusual skills and weird temperament so she stays by herself and continues to do research at Berkley and write. She’s content with her own company but for the rest of her days, she has no doubt that she’ll continue to see the ghost of her little Kelsey doing her mischievous little antics and teasing in such a delightful way in her mind’s eye.” 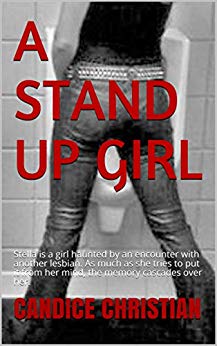